Half way through the state government’s request to socially distance ourselves from others to reduce the spread of the coronavirus.  We are on Day 7 of the “Federal 15” request to do the same.  I decided to make homemade Cinnamon Rolls as a weekend treat.  Baking is comfort-making.

These turned out so good.  I didn’t use as much butter, flour or sugar as called for in the original recipe from ComfortofCooking.com site.  So, if you are looking for a slightly less heavy/sweet version using cream cheese instead of butter icing,  you might like this recipe adaptation.  It is a two-rise recipe, so it takes a couple hours before you get to enjoy them.  I started them at 10am and we had them at 1pm for an afternoon treat.  Just keep that in mind when baking. 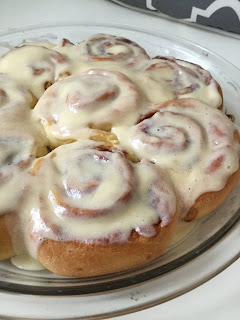 Here’s what I did (recipe adapted from The Comfort of Cooking using less butter and flour, more cinnamon flavor, and a cream cheese icing that isn’t quite as sweet.)

For the Icing/Glaze:
3 Tablespoons Philadelphia cream cheese
2/3-3/4 cup powdered sugar (depending on preference)
1 teaspoon vanilla extract
1 Tablespoon half & half (or as needed to achieve icing consistency)

DIRECTIONS:
For the Cinnamon Roll Dough:
In a small bowl, sprinkle the yeast over 1/2 cup warm water (110-115|degrees F) and set aside for about 5 minutes until it foams.

In a large bowl mix the half & half and water, sugar, salt and egg. Begin adding the flour, one cup at a time and mix until smooth. After the first two cups of flour have been mixed in, pour in the yeast mixture. Now begin adding the flour 1/4 -1/2 cup at a time until the dough is easy to handle and doesn’t stick to the sides of the bowl. If your mixture appears too dry dilute with a tiny bit of water to regain an easy to handle ball of dough.

Knead dough by hand on lightly floured surface for about 8 minutes until smooth and elastic. Place in a lightly buttered bowl, cover with plastic wrap and let rise in oven (or other warm spot in house) until doubled in size. (About 55-75 minutes with a bread-proofing oven setting).

Begin making the filling while the dough is rising so that it has time to thicken a little. Combine the melted butter, cinnamon and sugar.  Set aside to thicken until ready to use.

Once the dough has doubled in size, punch down the dough. Roll out on a floured surface into a 9x15 inch rectangle (for 15 rolls), or 9x12 inch for 12 thicker rolls.

Spread the filling all over the dough. Begin rolling on the longest side and roll the dough completely to the opposite edge.  Gently pinch the outer edge to the dough to keep it secure. Use a string, unflavored dental floss, or a serrated knife to gently cut the dough into one inch slices.

Place cinnamon roll slices close together in 9x13 baking pan or circular pie pans. Allow to rise a second time until dough is doubled, about 20-30 minutes in proofing oven.

At this point, begin making the icing/glaze :
Mix the cream cheese, powdered sugar, and vanilla. Whisk in half & half 1 tablespoon at a time until the icing reaches your desired consistency.

When dough has finished the second rise, bake at 350 degrees F for about 15-20 minutes for soft rolls.  Be careful not to over-bake. Check the rolls after about 15 minutes.  Remove from oven when golden on top, but still soft on the edges. Cool for about 5 minutes. 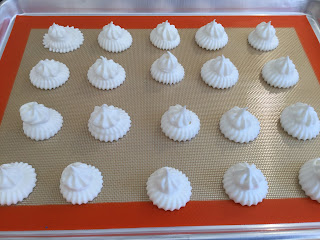